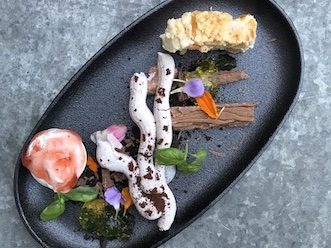 What's the History of Afternoon Tea?

With approximately 165 million cups of tea consumed annually by the British population, we want to know: do you enjoy going for afternoon tea?

Afternoon tea is regarded as one of the most quintessentially British customs, and so we decided to delve into the history of the traditional afternoon delight to find out exactly how afternoon tea came to be…

Where Did Afternoon Tea Originate From?

Afternoon tea was first hinted at in an unfinished Jane Austen novel as early as 1804, but it didn’t officially become a tradition until much later - around 1840.

It is generally regarded that Anna Maria Russell, the 7th Duchess of Bedford, invented afternoon tea, quite by accident.

During the industrialisation of England, many men began working much later, meaning dinner wasn’t served until around 9 pm.

Anna Maria Russell reportedly had ‘that sinking feeling’ at around 5 pm, and requested that bread and butter, cake, and tea be brought to her room to curb her hunger pangs.

The tradition of this mid-meal soon caught on and became a fashionable custom.

The History of Afternoon Tea: Women and the Wealthy

Afternoon tea quickly became a feminist affair, as it was generally consumed by women whilst their husbands worked.

This brought about an array of changes to women’s lives; dresses were designed to be much looser and free-flowing to accommodate the social event that took place behind closed doors. It gave women the opportunity to discuss affairs, opinions and to, of course, gossip.

As tea was extortionately priced, only the very wealthy could afford the luxury of afternoon tea; it soon became customary to lay the table with intricate linens, silverware, and finest porcelain, and experiment with tea blends.

Families began having portraits with their crockery, silverware, and tea to show off their wealth, and when the weather brightened, it became an excuse to take their afternoon tea outside to cement their wealthy status.

Once afternoon tea was served outside, it became a much bigger event and the men often joined for the occasion.

What Does a Traditional Afternoon Tea Consist of?

Afternoon tea usually starts with a selection of sandwiches; the traditional fillings are often smoked salmon with cream cheese or cucumber.

Following the sandwiches, plain or fruit scones are served with clotted cream and jam, followed by a selection of sweets and cakes.

All of the courses are served with a choice of traditional or herbal teas.

Afternoon tea is often served in a range of hotels and cafes, and many people still like to serve afternoon tea in their own gardens.

How Does Galtres Lodge Do Afternoon Tea?

Here at Galtres Lodge, we wanted to create an entirely new concept of afternoon tea; something that would encapsulate the traditions of days gone by, but with an exciting twist.

Galtres Lodge was named after the Royal Forest of Galtres, and so we took inspiration from our rich history and named our restaurant 'Forest'. This, of course, led us to our Forest afternoon tea, and we’ve used a forest theme and traditional Yorkshire delicacies throughout for an authentic and delicious take on the classic.

We serve a woodland mushroom soup for a deliciously woody start, followed by a traditional salmon sandwich and a less-traditional grilled vegetable wrap.

We then serve a traditional miniature Yorkshire pudding with beef, horseradish, and a charming little pot of cauliflower cheese!

In keeping with the classics, we offer delicious cherry scones with traditional clotted cream and jam, followed by our Forest cake and chocolate bark.

Our Forest afternoon tea is then rounded off with our pride and joy: our Forest floor! This is a creation of edible soil, pistachio moss, meringue toadstools, and apple rain - a culinary masterpiece that adds a whole new dimension to afternoon tea.

Each of our courses is carefully paired with a selection of teas, from traditional Yorkshire tea from Taylors of Harrogate to a minty gunpowder tea - a nod to York’s own Guy Fawkes.

Our tea pairings give our afternoon tea a menu-tasting feel; our aim is to connect the tea with the course and create an experience rather than a meal.

All of our teas - except our Yorkshire tea - are sourced locally from a company called Hebden, as this helps us to create that authentic, Yorkshire experience for our guests.

You need to taste our Forest afternoon tea to believe it, so head to our booking page to reserve your table.

If you have yet to book your stay, please visit our reservations page.